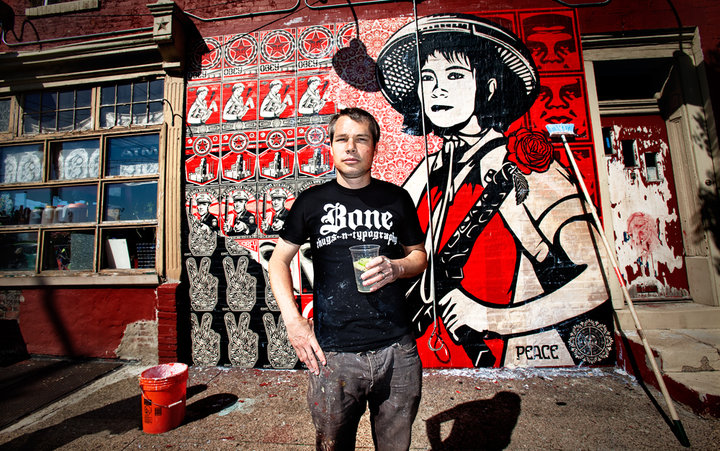 Many of my friends, for one reason or another, love to dis Shepard Fairey. I think his work is amazing. Granted it’s pretty boring that he’s out. No secret identity. No hooded, bandana-faced interviews. I’d never date the guy. Why would I waste my time with someone I could actually introduce to my friends? No awkward “So, what does Shepard do?” questions. No pedantic “Ali, is he still unemployed?” or “you’re too nice Alix, I just wish you’d step back and see how he’s using you” condescensions from my friends. I mean, really, what’s the point of dating a guy, if he doesn’t make your friends think you’re a doormat? With Banksy I get a lifetime of free shit to bitch about thanks to his Clark Kent fantasy. What a man!

k, so no dating Fairey. Apparently he’s got a wife or something anyway. Street artists get married now? Jeez, when are his little graffiti rug rats going to hit the street? But anyway, my point was, he’s a very compelling artist. My friends complain that he ripped off this or that or that his work is derivative… uh… so?

It’s the fucking remix century! Can we move on now? And for crap’s sake, it’s not like plenty of peeps weren’t bitchin’ about Roy Lichtenstein, or even Andy Warhol’s comic book “ripoffs.” And even if it wasn’t the fucking remix century, which it is, who, besides Sony Pictures, Universal Music, Sonny Bono, and Mousewitz / Duckau, thinks that human culture is some kind of private property owned by individuals or giant corporations and not to be remixed by, like, you know, the actual members of the culture!?

Anyway, look at this mural… it’s fucking genius! Whoever he “ripped off” never did this! 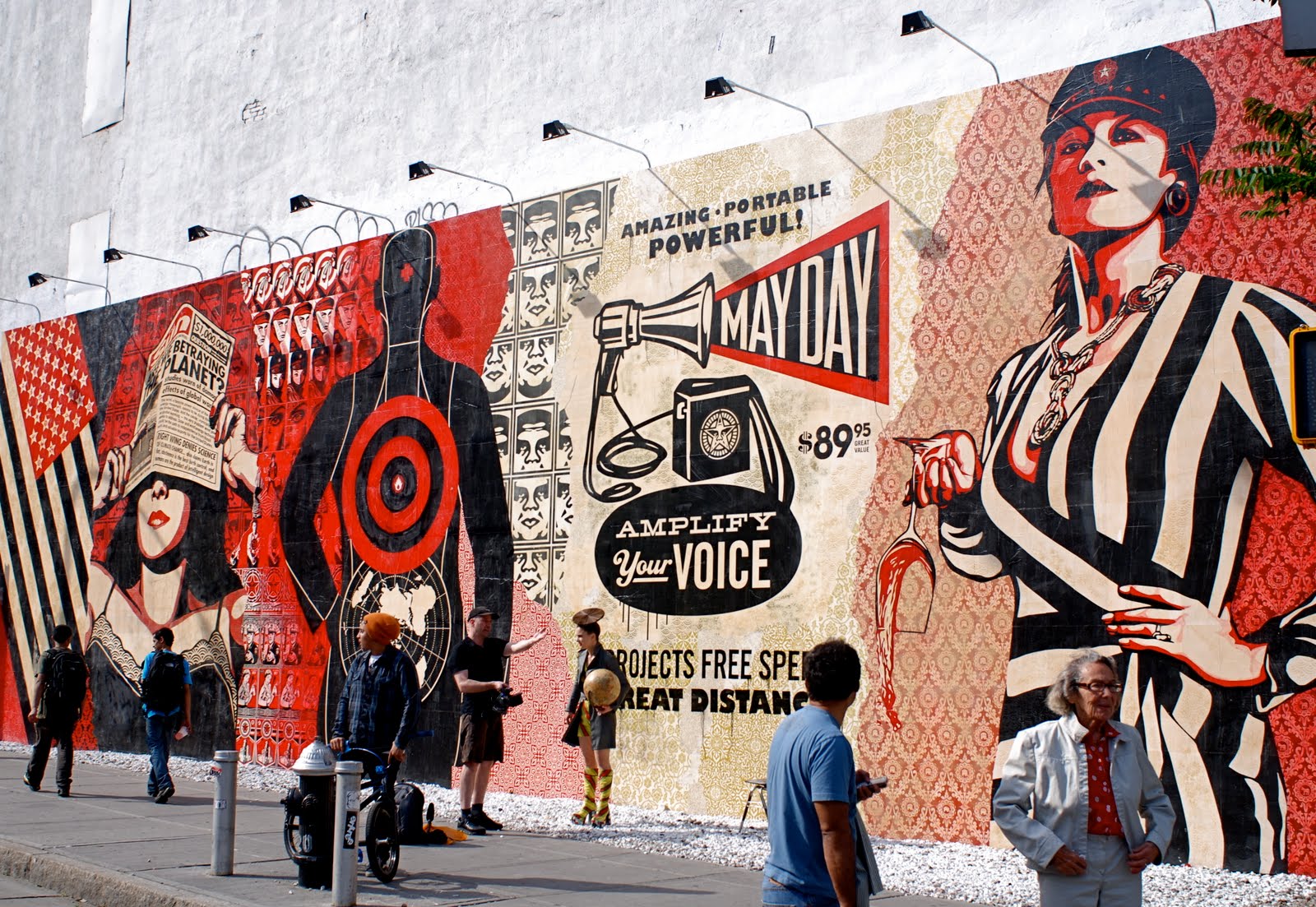 When Barbara Kruger moved from Conde Naste to MOMA she somehow managed to own a lot of the basics of black-white-and-red hard-edged design. For years she’s done a brilliant job with these elements, but she’s also PWND these fundamental, basic elements in a way that might preclude essential design choices by others. A little bit like Apple claiming that they own the human gesture. In his Houston & Bowery mural, in addition to ripping off whoever all he’s ripped off, we see Fairey PWN black-white-red hard-edged design in a powerful, yet free from Kruger, space of his own. Sure he’s appropriated plenty, but he’s also managed to squeeze his fingers into holds in a sheer rock face where I and plenty of others saw nothing. This is essential design that finds a way to be his own, even in such a well worn thoroughfare of the design city.

Whether the legions in the Obey t-shirts actually get that Fairey’s Obey was a chant against conformity, not a call to wrap ourselves in it, IDK. Still, for an artist without even a secret identity, Fairey’s pretty hot. I just wish he’d get some ear gauges or a lip ring or at least some tats.